What is moral and civic education?

It is following a course ofmoral and civic education (EMC) on freedom of expression, where he had worked with his students from cartoons, including those of Muhammad published in Charlie Hebdo The Center Samuel paty, professor of history and geography in the Paris region, was brutally murdered on October 16, 2020, near his college, in Conflans-Sainte-Honorine.

This tragic event thus focused media attention on the nature of this teaching: what does it consist of? How long has it been around? What are its purposes? Does it particularly expose teachers? Are they sufficiently trained to ensure it?

It should first be noted that moral and civic education is part of an ancient tradition, and even an original one, insofar as the concern for "moral and civic instruction" (this was then the official title of such teaching) has existed since the beginnings of the republican school.

Worn by Jules Ferry, the Law of March 28, 1882 - in addition to the obligation of instruction which it imposes for all children up to 13 years of age - made primary school secular by replacing “moral and religious instruction” (which had existed since the Guizot law of 1833) by "Moral and civic instruction": the "civic" replaced the religious, the training of the republican citizen that of the believer. “The first duty of a republic is to make republicans; and one does not make a republican as one makes a Catholic ”declared in 1903 Ferdinand Buisson, a great figure of the school of the Republic, at the congress of the radical-socialist party.

New for the start of the 2015 school year

Through different names, which are certainly far from being meaningless, this type of education (which in Jules Ferry's time was only introduced for primary school, but was from the Liberation in 1945 , extended to all levels of schooling) has hardly ever ceased to exist since then. 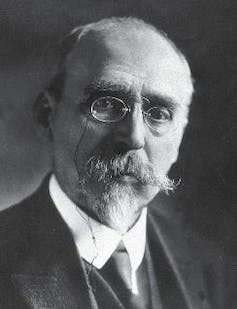 To return to the original inspiration of the republican project, to draw in particular from the source of Ferdinand Buisson's thought, to breathe new life into this teaching, such was the explicit intention of Vincent Peillon. But if the Minister wanted to give it life and breath again, it was because its legitimacy had lost its obviousness with families and teachers alike.

From this point of view, the EMC, which was included in the programs from the start of the 2015 school year, represents a novelty in the school landscape at the end of the XNUMXth century.e century and the beginning of the XXIe century. New, it is first of all by its title: the reference in the programs to "morality" had been abandoned since the 1960s (in 1961 in middle school, in 1965 in high schools and in 1969 in primary school, her chosen place, however, from which she had disappeared with civic education itself).

If civic education returned quickly enough to the programs, in 1985, morality did not benefit from this return until 2008 for primary school (Darcos programs) and, above all, before Peillon promoted it again in 2012. The first novelty of the EMC is therefore this: civic education is not only civic. Morality itself, designated by name as such, becomes, or becomes again, an object of teaching; it is constitutively integrated into an education which must therefore fully assume its normative dimension.

This means, for example, that an EMC lesson on human rights cannot be reduced to transmitting a certain amount of knowledge (historical, legal, philosophical, etc.) on these rights. It must try to make understand its value and to arouse in the pupils a adhesion. This is of course also the case for a lesson on freedom of expression, and it is therefore understandable that teachers can, in their CME lessons, expose themselves (and sometimes self-censor), when 'they are called upon to perform them in front of pupils who identify, for religious or ideological reasons, with opposing values.

The EMC facing the pluralism of values?

This brings us back to the major problem facing the EMC today: how to make the transmission of common values ​​compatible with the moral, religious and philosophical pluralism that a democratic society recognizes as legitimate? The contemporary moral universe has become plural, and therefore problematic. As the philosopher writes Paul Ricoeur "We do not live in a global consensus of values ​​which would be like fixed stars". From this point of view, the difference is considerable between the current moral and civic education (EMC) and the moral and civic instruction of the republican school of the origins.

In his famous "Letter to teachers" of 1883, Jules Ferry could bet on the possibility of teaching a common morality independent of religions (but not contrary to them), because the moral and cultural homogeneity then existing made this bet reasonable. It is this homogeneity which seems to be lacking today and which places moral and civic education in a delicate situation, when its legitimacy is no longer necessarily recognized by all students and families.

How, under these conditions, to further establish this legitimacy? Two conditions seem minimally required. The first condition is to prevent the EMC from being the site of an overly dogmatic transmission. Avoid, in other words, the reconstitution of the "republican catechisms" which flourished in the second half of the XIXe century. The EMC was born from the desire of Vincent Peillon to promote what he first called "secular morality", which claimed nothing less, he said, than to teach "good and bad, just and unjust".

As it was thus formulated, this project was hardly likely to take into account the plurality of values. Replacing the reference to "secular morality" by "moral and civic education", that is to say by a title less heavily loaded with moralism, could only further encourage this consideration.

The EMC has a chance to be educational only if it makes it possible to define in class a space of discussion within which the pupils are brought to be able to justify in a reasoned and argued way their moral and civic preferences and if they thus allows, to speak again like Paul Ricoeur, to be able to orient oneself in a problematic universe.

Hence the importance, for moral and civic education, of mediating knowledge (historical, literary, scientific, etc.): a moral and civic “education” is something other than a simple moral “education” and civic. Hence also the importance, for such teaching to have as educational spring devices making effective and profitable this space of discussion (institution of advice, regulated debates, discussion with philosophical aim, plays of roles…). This of course presupposes specific training for teachers, and perhaps this is one of the weaknesses that the EMC still suffers from today.

The second condition to which the EMC must adhere is to think of itself as an education for all. It should not be understood as a kind of "combat" teaching, especially directed against fundamentalist ideologies. It is not an education specifically intended for ghettoized urban areas or for what a bestselling bookstore, in 2012, called "the lost territories of the Republic".

The transmission of the “values ​​of the Republic” on which the Ministry of National Education insisted after the 2015 attacks has not always succeeded, given the very circumstances which have motivated this insistence, in avoiding ambiguity. Learning to reflect in a reasoned, critical and educated way on beliefs and prejudices, which are so often peculiar to childhood, is a general educational goal. It is this general purpose that justifies the presence of the EMC in national programs.

The editorial of the week of October 22 with Camille: Samuel Paty, Christians and politicians, persecutions, miracle in Uganda

Women who bear witness to their faith through creativity

In a stadium, children stop their match, kneel and pray

Hunger strike at Saint-Pierre church in Calais to support migrants

Without submarine cables, no more Internet: is Europe ready?

Discover the “lesson” of a young boy with a disability, much appreciated by the Pope