Trouble continues in Iran after the death in custody of a young Kurdish woman aged 22, after being arrested and apparently beaten by the Iranian morality police.

Iranian forces took Mahsa Zhina Amini into custody on September 16, 2022, because she was not wearing her hijab according to the rules.

As of September 28, at least 76 people were confirmed killed and hundreds were arrested and injured during protests that erupted after Amini's death.

As a scholar of Kurdish origin and professor of Middle Eastern studies at the University of Central Florida, I have already written about the gender in middle eastern cultures and Iranian protests.

With the exception of blunt condemnations, discrimination against women in Iran is often passed over in silence while the world cares limitation of the country's nuclear capabilities.

Some scholars and activists have criticized international law for its lack of initiative and public action to recognize the systematic discrimination of women in Iran as gender apartheid and act to prevent it.

Many discriminatory laws, including those requiring women to cover their heads and faces with a hijab, respect neither tradition nor religion and are applied to women of all ethnicities and faiths.

After all, Amini was not Shia, neither by ethnicity nor by religion. 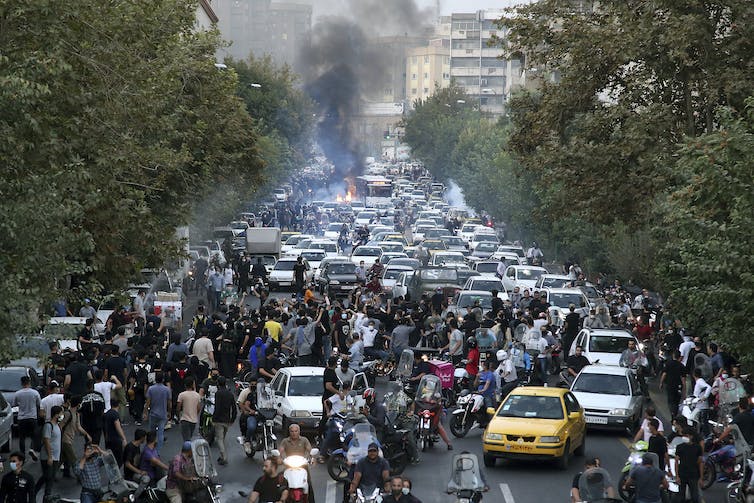 In this photo taken in hiding on September 21, 2022 in central Tehran, demonstrators chant slogans to denounce the death in custody of Mahsa Amini. (AP Photo)

La 1979 Islamic Revolution established a republic that implements inhuman policies and practices of racial segregation and discrimination similar to those practiced in South Africa under the former brutal government apartheid regime.

Laws and policies in Iran establish and maintain male and state dominance over women and their right to choose their own clothes or obtain a divorce. Systematic gender inequalities are legally prescribed and enforced by the regime to deprive women of the “right to life and liberty” and “human rights and fundamental freedoms”, which, according to Article II of the 1973 United Nations Convention on Apartheid, is considered "the crime of apartheid".

For example, according to article 18 of the Iranian Passport Law, a married woman still needs written permission from her male guardian to travel abroad.

In Iran, women cannot hold any position in the judicial, religious and military systems, nor be members of theAssembly of Experts, Council of "opportunity" or Council of Guardians, the three highest councils of the Islamic Republic.

By law, women cannot be presidents or supreme leaders of Iran. According to article 115, the President of the Islamic Republic must be elected among “religious and political men”.

Furthermore, the Iranian state added discriminatory elements to the Penal Code — one of these elements is the principle according to which the value of a woman is equal to half that of a man.

This principle applies to issues of compensation for murder or when separating a family inheritance. It also applies to the weight given to testifying in court or obtaining a divorce.

The state also imposed a systematic segregation in schools, hospitals, universities, transport, sports and other important areas of daily life. 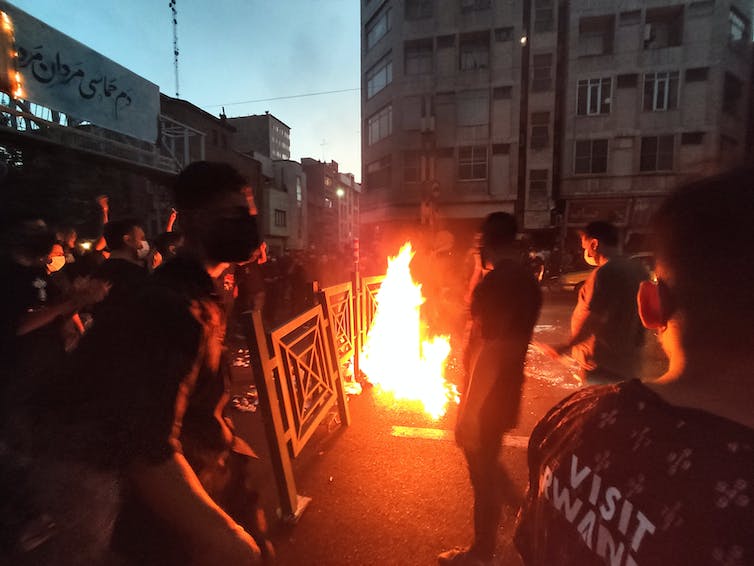 In this photo taken clandestinely, on September 21, 2022, demonstrators set fire to and blocked a street in order to protest against the death in custody of Mahsa Amini. Access to social networks has become difficult in Iran. (AP Photo)

For decades, gender apartheid in Iran relegated women to the backs of buses with a metal bar separating them men.

Under government leadership, universities limited the options available to women and denied them access to many fields of study.

Since the 1979 revolution, Iran generally prohibited for women to attend football matches and other sports in stadiums. In August, for the first time in over 40 years, the Iranian regime allowed women to attend a match between two male clubs in the stadium of the capital, Tehran.

Religious play a major role in decision-making. They asserted that women should be protected of the masculine atmosphere and the sight of half-dressed men at sporting events. 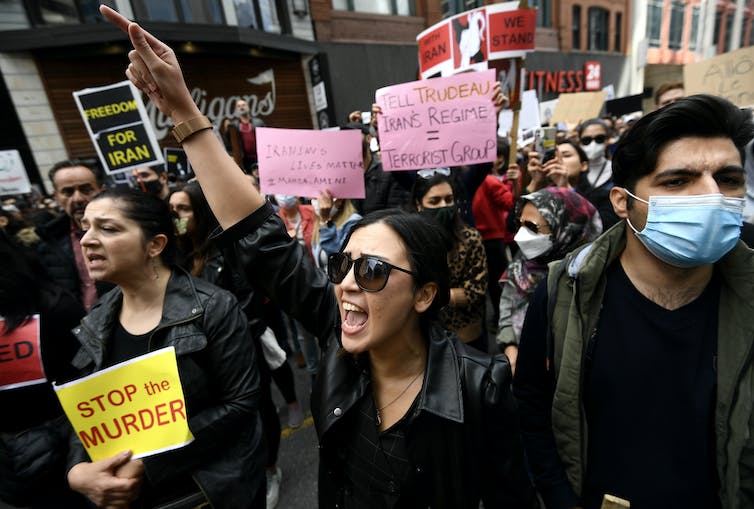 Members of the Iranian community and their supporters demonstrate in Ottawa on September 25 to denounce the Iranian regime, following the death in custody of Mahsa Amini. The Canadian Press/Justin Tang

As part of these discriminatory policies, Persian terms such as za'ifeh, which means weak and incapable, found their way into dictionaries as synonyms for "woman" and "wife".

Like the articles of the Constitution of the Islamic Republic of Iran, the principles of the morality police are based on an interpretation of canonical Shia texts and are implemented through modern tools of control and coercion.

Under international criminal law, unlawful acts committed within a system of oppression and domination are considered crimes against humanity.

As stipulated in the United Nations Convention on Apartheid, these crimes include the denial of fundamental rights which prevents one or more racial groups from participating in the political, social, economic and cultural life of the country.

Best known for the brutal regime in South Africa, apartheid comes from the Afrikaans word meaning “separation”. This is ideology which was introduced in South Africa in 1948 and supported by the National Party government.

As stipulated in the United Nations Convention against Apartheid, the obligation to wear the hijab is at the heart of what I call extreme gender apartheid in Iran, where a misplaced headscarf can result in up to 15 years in prison, whiplash, fines, inhumane and unlawful arrests, even death.

Product movements against compulsory hijab appear every year in Iran, like this time, following the death of Mahsa Zhina Amini.

In Kurdish, her name comes from "jin", the word for woman, and shares a root with the word for life, "jiyan".

Add “azadi” – the Kurdish word for freedom – and you have the slogan “Jin, Jiyan, Azadi”, which means “Women, life, freedom”. It resonates among protesters on the streets of Iran and around the world to dismantle the gender apartheid of the Iranian state.

The editorial of the week of 02/12/2022 with Camille: committed Protestants, Madagascar, Christians in Nigeria, Mehdi Djaadi

"Viens": the new single from Zélé which invites worship

Pakistan, a country where Christians are citizens rejected by society and power

Niger: discover the story of Mariama, a Christian of Muslim origin

58 weeks of consecutive baptisms in a church in Louisiana

Are the political ideas of the Enlightenment reactionary?