MRNA: four letters that have toured the planet and designate what is already proving to be a major breakthrough in the field of vaccination. But what are we talking about exactly?

RNAs (for Ribonucleic Acids) are molecules whose structure is similar to that of DNA molecules (Deoxyribonucleic Acid). Much less stable than the latter, which means that they are more easily destroyed, however, RNA molecules play many roles in cells. These vary according to the class of RNA considered: transfer RNA or ribosomal RNA which are involved in the assembly of proteins, guide RNAs which help to position certain enzymes in the right place… Even today, new classes of RNA possessing various biological functions are discovered.

The RNA used for vaccination belongs to the class of messenger RNAs (mRNA). These small molecules have been known since the 1960s, when François Jacob and Jacques Monod, two eminent French scientists, played a major role in their discovery. Messenger RNAs are fleetingly present in our cells. In a way, they constitute the “assembly plan” of proteins: in the nucleus of the cell, the information corresponding to a given protein, carried by the DNA, is “copied” in the form of an mRNA molecule. This then passes into its cytoplasm (its “body”, ie the space between its nucleus and its plasma membrane). It will be read there by the ribosomes, the units responsible for the production of proteins, and then quickly destroyed.

This is the function of mRNA vaccines. The principle is in fact to inject into muscle tissue cells the information allowing them to produce a protein carefully selected and modified the infectious agent against which one wishes to obtain immunity -in this case the Spike protein of SARS-CoV-2. The cells of the vaccinated individual will themselves transiently manufacture the viral component in question, which will be recognized as foreign to the body and will trigger a specific immune response.

It has long been difficult to work with RNA molecules, due to their fragility. But thanks to scientific progress, things have changed, and today we can consider using mRNAs as a vaccine.

Advantages and disadvantages of mRNA vaccines?

First of all, it is an even safer vaccine approach in all its stages, from conception to use, because no living being is handled. The manufacture of mRNA vaccines has also become "simpler" than that of other types of vaccines, whether they are live attenuated vaccines (based on the use of live infectious agents modified so that they lose their potency. infectious) or inactivated vaccines (which contain "killed" infectious agents or carefully purified and primed fragments of infectious agents).

The production of these two types of vaccines against viruses usually requires the use of cell cultures or embryonated eggs, under very controlled conditions. MRNA vaccines overcome these slow and costly steps because they are produced by chemical synthesis. In addition, unlike live attenuated vaccines, the risk of a return to virulence is zero, since they do not contain an infectious agent but only the information necessary for the production of a viral protein.

In addition to the fact that mRNA vaccines are relatively easy to produce and inexpensive, their adaptation to changing pathogens can occur quickly. If new viral variants against which the vaccine would be less effective emerge, it suffices (theoretically!) To modify the sequence of the mRNA to make it correspond to those of these new viral variants in order to regain optimum efficiency.

Finally, a consequence of their original presentation to the immune system is that mRNA vaccines generate broad immune responses, including cellular (lymphocytes) and humoral (antibody) components. However, these broad responses are more effective in the fight against viruses.

The disadvantages of these mRNA molecules are mainly related to their rather poor stability. Indeed, they are fragile molecules and their conservation is not always obvious even if progress has been made in recent years (freeze-drying). Whether outside or in cells, mRNAs disappear quickly, due to their molecular structure ...

Another disadvantage is that when mRNAs are foreign to our cells, they can also activate type 1 and 3 interferon responses (interferons are proteins produced in particular in reaction to viral infections). These responses ultimately lead to their degradation and may reduce the induction of the desired immune response upon vaccination. However, the optimization of the mRNA sequences according to various approaches makes it possible to overcome this drawback.

Can they modify our genomes?

The mRNAs of the vaccines developed against COVID-19 are in no way genetically modified organisms (GMOs) and do not constitute a gene therapy approach. Indeed, they are just small pieces of nucleic acids inspired by viral genomes, which do not have the capacity to modify our genes.

Remember that mRNAs remain in the cytoplasm of cells and are not intended to reach the nucleus. To enter this part of the cell, the molecules present in the cytoplasm must carry a specific “labeling”. In addition, transport molecules should intervene to take them there. What the mRNAs of vaccines do not have.

And even if these vaccine mRNAs enter the nucleus, the RNA cannot integrate into our genome without being transformed into DNA (we speak of reverse transcription), which requires very specific enzymes, called reverse transcriptases. These are most often viral: they are found more particularly in viruses of the Retrovirus family (such as HIV, responsible for AIDS) and Hepadnaviruses (such as the hepatitis B virus). Somewhat specific proteins with reverse transcriptase activity, such as eta DNA polymerase, also have been identified in our cell. However, these proteins are not localized in the cell cytoplasm and are not intended to interact with mRNAs. A modification of our genomes by an mRNA is therefore more of (science) -fiction ...

Moreover, it is not enough for the reverse transcription to take place: the integration of the DNA obtained into the genome would require the presence of other enzymes called integrases. And if we push the fiction so far as to consider integration despite everything, this would not lead to deleterious effects for the host cell. This would require that this fragment fits into a region containing a gene, but genes do not represent the major part of our genome. In addition, such a modification would not be transmitted to the offspring anyway. 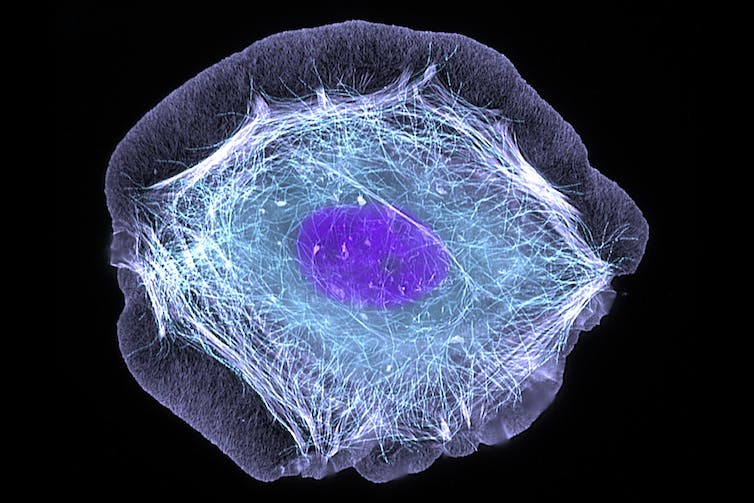 Our cells are very compartmentalized spaces. The mRNA injected by the vaccine only enters the cell body (pale blue), it does not have the means to access the nucleus (purple). Torsten Wittmann, University of California, San Francisco / NIH, CC BY-NC

For all these reasons, the “risks” of modifying our genomes by vaccine mRNAs are almost statistically nil. We run a much higher risk when we take an aspirin, our car or board a plane… or we get infected with SARS-CoV-2.

Have they been developed too quickly?

This remark comes up frequently in recent debates. Here too, it should be remembered that vaccination with nucleic acids, including mRNAs, has a long history (the first attempts to use mRNA for vaccination date back to the early 1990s).

Very many preclinical publications relating to this approach in animals (rodents, pigs, cattle and macaques, etc.) have been published and have not shown major side effects in the short, medium and long term. In addition, the clinical tests in humans (phases 1, 2 and 3) demonstrated excellent vaccine efficacy and no more side effects than with conventional vaccines. It should be noted in passing that even in the placebos groups (that is to say in which no active principle has been injected), side effects are reported. This means that said side effects are partly related to the injection itself.

We now have hundreds of millions of people over the age of 12 vaccinated without major side effects. MRNA vaccines protect against serious clinical forms et significantly reduce viral transmission by reducing the number of days the virus is shed in the few people who are nevertheless infected.

Finally, in veterinary medicine, DNA vaccines have been available for several years (West-Nile Innovator® against West-Nile disease in horses, Oncept Canine Melanoma® against oral melanoma in dogs and Clynav® against pancreatic disease in salmon ) and no major adverse effects have been reported.

What about the allergic phenomena observed in some patients?

Allergic reactions have been reported in some patients following vaccination. Post-vaccine allergic reactions, although rare, are well known. They are linked to certain components of the vaccines for which the vaccinated patients would have been sensitized previously (in their everyday life or during previous vaccinations including the same compound).

Faced with the risk of allergies, we are indeed not all equal, and our genetic heritage plays a large part. Any allergic reaction (type 1 hypersensitivity) goes through a phase of sensitization to the antigen (the substance recognized as foreign by the immune system, which triggers the reaction) - the first time it is encountered - then through a phase of latency. Later, when confronted again with the same antigen, the organism develops the allergic reaction.

With regard to allergies following vaccination against Covid-19, these have been compared to a substance, polyethylene glycol, present at low dose in a vaccine formulation. This substance, in common use, has been identified as an allergen in rare cases and would have posed a problem in people at known or unidentified allergic risk. In the United States and Europe, where millions of people have already been vaccinated, allergic reactions have actually been noted, but they remain rare.

Generally, people at risk know each other and for this it is advisable to be vigilant with mRNA vaccines, just like more conventional vaccines, but also with simple antibiotics (penicillin) or even the most classic foods (peanuts , sea food…).

Medical treatment is never a trivial act and vaccination is no exception to the rule. It must be the subject of a rigorous benefit / risk analysis, for ourselves and for the community, nationally and internationally. In the case of the current Covid-19 pandemic, it is clear that the side effects associated with the use of mRNA vaccines are in the vast majority of cases temporary, limited and do not concern all vaccinated patients while the health, economic and social risks of the Covid-19 crisis are at the fore and for the entire population.

The use of these new weapons - closely followed by the players in charge of pharmacovigilance - is increasingly proving to be a major advance in the fight against infectious diseases. And the revolution might not stop there: indeed, mRNAs could also be used to fight against many cancers, orphan diseases, And even the allergies !