Risk of drought and heavy rains: a map to take stock of a contrasted summer

In early May 2021, the Geological and Mining Research Office (BRGM) produced a summer drought risk map for groundwater.

These forecasts turn out to be quite pessimistic, with probably low levels for the summer over a large part of the water tables; there is even a very strong risk of drought in eastern France - from Alsace to Provence.

However, we must consider the months of May, June and July, which were particularly wet over a large part of the territory. However, the drought risk map is partly based on Seasonal forecast from Météo France "hot and dry" for May-June-July.

We can therefore wonder what impact these heavy rains will have had on groundwater levels and if this could have modified the drought risk map and its information. 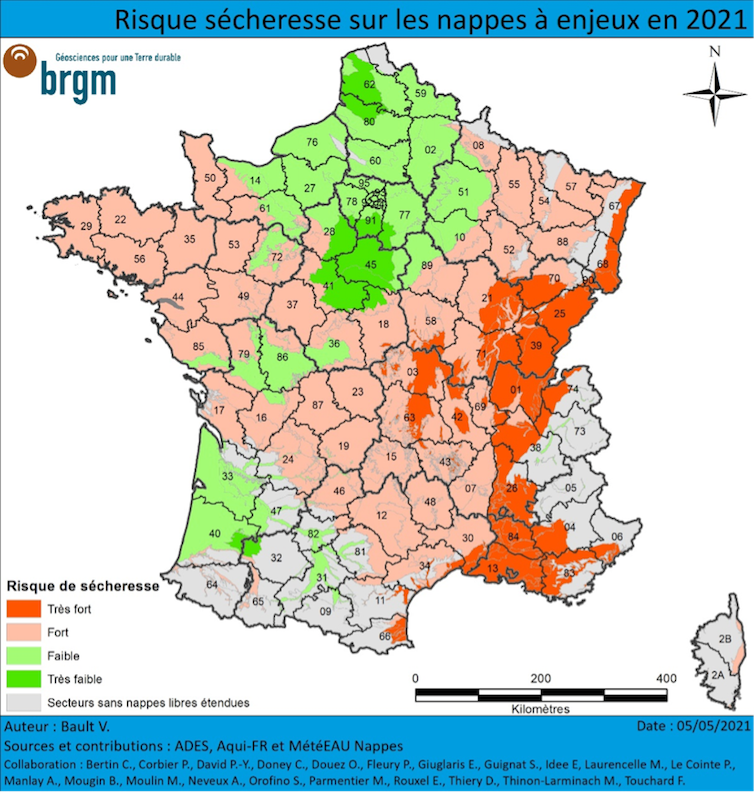 Map of the drought risk on the groundwater. BRGM, CC BY-NC-ND

How is the drought risk map produced?

The map was drawn up by regional hydrogeologists from BRGM. 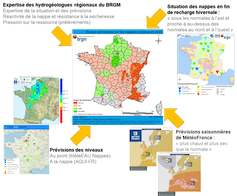 Their expertise is based on the initial state of the groundwater after the winter recharge period 2020-2021, on the Seasonal temperature and rainfall forecasts from Météo France and on the forecasts of groundwater levels available until September 2021 (carried out as part of the Aqui-FR project and from MétéEAU models Tablecloths).

What is the impact of the rains in May-June-July?

In summer, precipitation do not generally generate groundwater recharge.

The infiltrating water is in fact usually taken up by the vegetation; and summer thunderstorms promote runoff, preventing effective water infiltration.

The rains of the last few months thus had a weak impact on the groundwater: levels generally remained down, but the situation improved during May, June and July.

It's a bit like having a problem with a leaky bathtub, with a faucet filling it every once in a while.

A water table continuously empties into rivers, springs, wetlands and even oceans and seas. In the absence of a water supply, the groundwater levels drop. This is what is usually observed from April to October. When the tap is wide open, the infiltrated rains are sufficient to compensate for the loss of water to the outlets: the water table is then recharged and the levels rise.

The monitoring of the Villers-en-Haye (Meurthe-et-Moselle) well is a good example to illustrate what happened in 2021 on most of the French aquifers.

The graph below shows the average monthly levels for 2021 (points and curve in black), in comparison with classes ranging from very high (in blue) to very low (in red).

Over 2021, there is a strong recharge in February followed by three months without rain, with levels dropping sharply and a situation deteriorating rapidly - from highs (blue) in February to moderately low (yellow) in May.

Levels of the Dogger limestone table in Villers-en-Haye. HAS

In May and June 2021, rainwater managed to infiltrate into the water tables, but it was not sufficient to compensate for the outlets to the outlets. Levels therefore continued to fall, but more slowly than usual. The situation then improved, going from moderately low (yellow) in May to moderately high (light blue) in July.

The rains also had an indirect impact on the water tables: the soils being humid and the temperatures low, there was less water withdrawn from the water tables for irrigating crops and gardens, filling swimming pools, etc.

Where do we stand with the risk of drought?

The summer drought risk map is still relevant today, even if this risk has receded in many sectors thanks to this wet late spring and early summer.

A very strong risk of drought (in dark red on the map) is confirmed on the water tables around the Mediterranean and the Rhone corridor. On these sectors, groundwater restrictions have already been taken. Even though it rained well on the Rhône-Saône corridor and the rivers are high, the water tables from Bresse to Bas-Dauphiné have only recharged very little.

Sectors at "high" risk (light red) as well as the plains of Alsace and Limagne ("very high" risk, dark red) are home to water tables sensitive to rain. In the absence of sufficient rains and with high temperatures, some basins could find themselves locally in tension during August.

The risk will be accentuated on very reactive aquifers (in particular basement and karst limestones) and on aquifers heavily stressed by pumping. The risk on these slicks is therefore “low” for the month of July, but becomes “strong” again for the end of the summer.

Finally, the levels of water tables identified as “very low” (dark green) to “low” (light green) risk should remain satisfactory throughout the summer.