Ten years after its creation, IPBES – the intergovernmental platform on biodiversity and ecosystem services – unveiled in early July 2022 two new reports bearing on sustainable use of wildlife and values ​​attributed to biodiversity. This work will have mobilized more than 80 scientists from different countries for four years.

Often presented as the IPCC for biodiversity, the IPBES assesses scientific knowledge and supports the development of public and private policies and actions, by carrying out collegial expert appraisals on a global scale.

In recent years, IPBES has gained notoriety thanks to its Evaluation published in 2019 in Paris, which highlighted the sixth biodiversity extinction crisis, its causes and the transformative change to be initiated to overcome this crisis.

The fact remains that biodiversity and the IPBES remain subjects that are too little discussed in the public sphere, compared to the climate including.

These new reports allow us to become aware of a situation that we forget or are too often unaware of: on Earth, three billion human beings depend directly on harvesting wild species for their subsistence.

“Locked up” in our developed societies, our urban or peri-urban lifestyles, we are often not aware that 45% of humans on the planet are thus linked to wild species in an essential way. It is not a question here of traditional agriculture or breeding, based on domestic species and which we would tend to consider as the ideal of a reconnection with nature.

I am frequently surprised by this ignorance: in recent days, on social networks, some people have been moved by the title of one of these new IPBES assessments - "Use of wild species" -, thinking that it would encourage industrial type levies!

It is necessary to underline the extraordinary cultural and natural richness of which this situation testifies: the local or autochthonous populations indeed hold the knowledge to nourish themselves, to look after themselves or to use daily as materials, fabrics or firewood dozens of wild species.

In total, 50000 wild living species are thus involved in a multitude of crucial uses for these populations.

These uses are important not only in terms of the number of species, but also in the quantity of biomass extracted: for example, the wood harvested by local populations to make fire represents half of the wood extracted from the forests in the world. Of course, this is not about industrial felling or clear cutting over hectares… even if the local impact of such practices can turn out to be significant in already tense environmental contexts.

The report cites examples of very varied uses: it may be wild rice harvested in the Great Lakes region of North America, vicuña wool collected by Andean populations, the flesh of large Amazonian fish or more textile fibers from the nettle of the Himalayas in Nepal.

Very often, the rules of use by local populations promote the protection of these wild species and the equitable sharing of the resources they represent within communities, guaranteeing the sustainability of these uses. 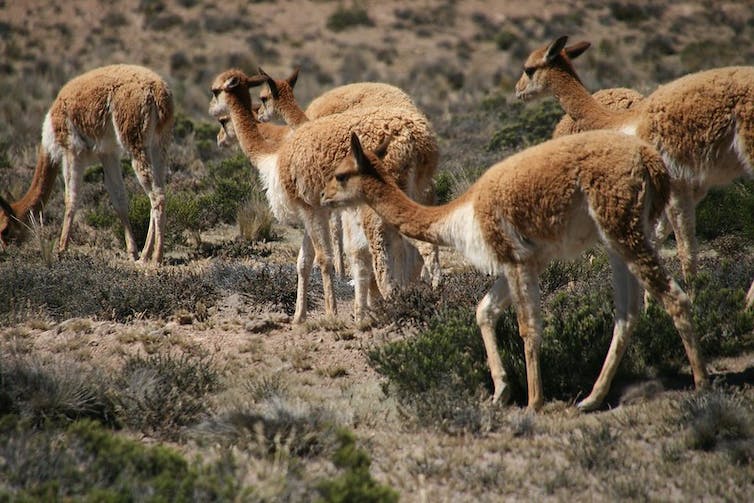 An ever-increasing impact on the environment

The report on the sustainable use of wildlife highlights another key reality: two-thirds of the world's poorest people depend directly on wildlife.

These people are therefore particularly vulnerable and dependent on the availability of these resources. However, this availability is often undermined by the environmental crisis.

Industrial deforestation impacts, for example, the use of forest species, climate change and hazards are deleterious for many species, the growth of human populations greatly increases the demand for fish or firewood.

According to the International Union for Conservation of Nature (IUCN) and a assessment based on the study of ten thousand of these species, two-thirds of these wild species taken from the natural environment by local populations are in decline; 172 are even in danger of extinction.

Some of these uses clearly show the stakes and conflicts of use that can arise when these species are also affected by commercial uses that will limit or be antagonistic to local subsistence uses.

Thus, wild vicuna wool is harvested by Andean communities, but the luxury textile industry buys this wool at low prices from these communities to resell it at exorbitant prices. We can also cite the giant pirarucu freshwater fish in the Amazon – weighing up to 300 kg – which is consumed by local communities, but whose popular flesh also attracts local commercial fisheries, which may have led to a decline – fortunately now under control – of its populations.

Faced with the difficulties encountered in the use of wild species becoming less available, local populations may turn to production linked to domestic species in cultivation or breeding. The consequence of this trend is inevitably the development of a greater influence on the environment.

Any cultivation or breeding in fact mobilizes a large area of ​​intervention which will be taken from the contingent of spaces that are still little anthropized; it also carries risks of introduction of exotic species or emergence of diseases by favoring the promiscuity between wild and domestic species.

The use of wild species is also unfortunately the result of industrial processes that we know well.

For example, industrial logging and fishing are activities that we know are most often unsustainable. The IPBES assessment reports on all studies that quantify and diagnose these situations.

Overall, two figures show us the extent of these problems: 34% of fish stocks are overfished and just over one in ten tree species is on the verge of extinction, while the area of ​​forest cover is shrinking. critically in many regions, almost 10 million hectares each year.

South Africa: the ravages of overfishing on biodiversity (France24/Youtube, 2021).

Characteristically, the use of wild species in international trade is difficult to regulate. Trafficking represents a source of illegal income alongside those derived from drugs or prostitution and of the same order of magnitude. Few countries or authorities agree on deforestation indicators and some international agencies even confuse natural forests (in which the impact of man is moderate) and tree plantations.

It is the same in the field of fishing where industrial methods cause considerable damage in several respects: catches, sadly called "accessories", cause the decline of unresearched species (for example, sharks or dolphins) or fishing methods that seriously damage the environment (bottom trawls).

What future for nature?

To reverse these deadly trends, we need to form an alliance with biodiversity. This subject was the subject of the second assessment presented during the plenary session of the IPBES in Bonn this July 2022: “The values ​​of nature”.

Here again, the word “value” is misleading in Western culture, because it conveys an instrumental and market meaning.

In fact, the experts - anthropologists, ecologists, sociologists and philosophers - of the IPBES have assessed the ways in which different human societies consider nature, positioning themselves as consumers de nature, or alive in ou with nature or still alive as nature for totemist or animist peoples, for example. These last conceptions lead to accepting its intrinsic value, independent of us humans, and to living in a fusional way with it.

Analyzing these designs allows you to draw inspiration from them, for the better; in a very pragmatic way, it also ensures the sustainability of natural areas in the 38 million square kilometers in 87 countries managed by indigenous peoples and local communities, thanks to the consideration and inclusion of the latter.

Failing to open ourselves to these other conceptions, we will continue to deepen the current declines which will inexorably lead to the disappearance of half of the biodiversity within a few decades… and to that of all the services that the ecosystems offer us.

When God smiles on the bold!

Doomscrolling, a worrying habit for the mental health of adolescents?