In Italy, the announced victory of the far right

In the last Italian legislative elections, held in March 2018, the "Fratelli d'Italia" won just 4,4% of the vote. Four and a half years later, the far-right formation is, according to all the polls, on the verge of winning a historic victory on September 25.

If the trends announced by the opinion polls are confirmed, the Brothers of Italy will be, from Monday, the first party in the country and will form a government with their coalition partners: the League, of Matteo Salvini, and Forza Italia, of Silvio Berlusconi. The leader of the “Brothers”, Giorgia Meloni, 46, would become prime minister.

The historical lineage of Brothers of Italy going back to the neo-fascists of the post-war period, this advent would be heavy with meaning. Indeed, the very symbol of the party (a tricolor flame) is the same as those of its predecessors National Alliance, and the Italian social movement, founded by veterans of the Italian Social Republic of Mussolini. 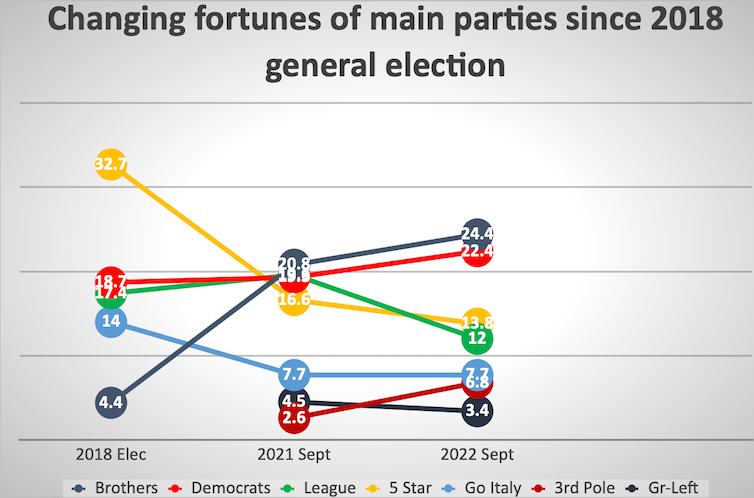 The rise of the Brothers of Italy. Piepoli Institute, Author provided

The result of this election is already considered inevitable, not only because the margin of difference in the polls is so wide, but also because the parties of the center and the left have failed to form a coalition before deadline. This inability to agree is for the left a form of political suicide. the italian electoral system – partly majority and partly proportional – favors parties that conclude pre-electoral pacts and form large coalitions. However, the Democratic Party rejected an alliance with the 5 Star Movement because of the role that the latter played in the fall of the government of Mario Draghi, last July.

As to "third pole", centrist, created by two small parties, for its part refused to ally itself with the Democratic Party because of the latter's proximity to the Ecological Left.

Result: the right-wing coalition could, with more than 40% of the vote, obtain more than two thirds of the seats in the Italian Parliament.

A majority of this size would allow the government to amend the Constitution and introduce the election of the president by direct universal suffrage – an idea on which the three coalition parties seem to agree.

When a far-right political figure like Meloni talks about replacing parliamentary democracy with a “people's democracy”, it worries many Italians. Fears of a return to fascism as it existed in Italy may nevertheless seem exaggerated. A detailed examination of any policy area (European integration, immigration, energy crisis, war in Ukraine) indeed reveals significant differences between the three right-wing parties. It is by no means certain that they will be able to form a coherent government, and even less that they will manage to carry out a radical constitutional revision.

The positions adopted by the Brothers in Italy also often seem incompatible, even contradictory to each other. This is explained by the fact that Meloni is aimed at two audiences. One needs to be reassured about the extremism she will show once elected; the other is made up of party members, activists and supporters who need to hear about upcoming changes, are ideologically driven and more interested in tone and big picture than details.

Meloni's stance on Europe is another cause for concern. Although she declares herself in favor of keeping Italy in the European Union, she also wants to review various financial agreements with the EU. As for the other two parties in his coalition, they are well known for their Euroscepticism. Their program ("For Italy") which says it wants a EU more political and less bureaucratic, worried about its real meaning.

What about the Italian line on the Ukrainian question? Europe and Russia are both wondering whether the election result could lead to a change in the position of the Italian government, which would undermine the united front of Westerners. If Meloni seems aligned with the European position, Salvini et Berlusconi are, for their part, skeptical about this hard line with regard to Moscow, even are downright opposed to it.

The US National Security Council recently revealed evidence that Russia is secretly providing financial aid to a wide network of (as yet unnamed) parties, including Italian ones, in order to disrupt democratic processes and promote the coming to power of pro-Moscow formations. Italian right-wing parties are suspected of having benefited from this support.

Meanwhile, Italy is in a significantly deteriorating economic situation and is particularly exposed to the Russian gas crisis. The International Monetary Fund estimates that an embargo on Russian gas would lead to a economic contraction by more than 5% – higher than in all other EU countries except Hungary, Slovakia and Czechia.

The country would also be affected by the decision of the European Central Bank to revise its stimulus program downwards: the ECB should indeed continue its policy of raising key rates initiated in the middle of the year to counter inflation and slow down its purchases of sovereign bonds.

No wonder investors are selling Italian bonds and hedge funds bet heavily on the downside on these bonds. In short, the markets are worried, even if they price in, so to speak, the expectations of a victory for the right, which could therefore offset a dramatic fall after the elections.

A situation comparable to 2018

It should be pointed out that Italy has already found itself in a similar political position. During the 2018 general elections, some feared the consequences of a populist party, in this case the 5 Star Movement, coming to power. The latter, with an extraordinary score of 32,7% of the vote, had formed a government with Salvini's League. Yet that government proved hopelessly divided (some would even say incompetent) and collapsed a year later. According to today's opinion polls, the 5 Star Movement is now an almost marginal political force.

What distinguishes the context of 2022 from that of 2018 is that for the first time, the heirs of neofascism are about to come to power. We must not forget that the Italian political system is difficult to monopolize, and even more difficult to reform. In short, the threat posed by Meloni is not yet determined.

In Chicago, a man shoots a 7-year-old boy who was going to church with his family

Disguised as Kylo Ren, a female priest celebrates the wedding of Star Wars fans in Wales

In Bangladesh, the body of a dismembered Christian is found near a pond