Saturday August 14, 2021, 8:29 a.m., earth aspen in Haiti. Already hard hit 11 years ago by an earthquake that shook the capital Port-au-Prince and claimed between 100 and 000 victims, Haiti was again hit by a high magnitude earthquake (Mw 250 moment magnitude ), this time along the southern peninsula, about 000 km west of Port-au-Prince.

The damage is considerable and the toll is already heavy. As relief efforts try to save lives, aftershocks hit the epicentral area, as expected after any earthquake of such magnitude.

Tectonic faults in the North Caribbean area and the directions of deformation. Eric Calais, Provided by the author

Haitian, French, Japanese and American scientists are working to try to understand what happened, in order to produce information that can be used as soon as possible by the emergency services and to better be able to anticipate this type of event in the future. 'to come up. This work is simpler than in 2010 thanks to a combination of local and international efforts which resulted in the establishment of a network of so-called “citizen” seismological stations in Haiti.

Hispaniola, an island on the borders of two tectonic plates

The island of Hispaniola, the second largest island in the Caribbean shared between the Dominican Republic and Haiti, is traversed by large seismic faults resulting from the subduction (sinking) of the North American plate under the Caribbean plate. Here, this movement is done so obliquely under Hispaniola and Puerto Rico that the movement activates both reverse faults (also called overlaps) and dropping faults (also called dropouts). 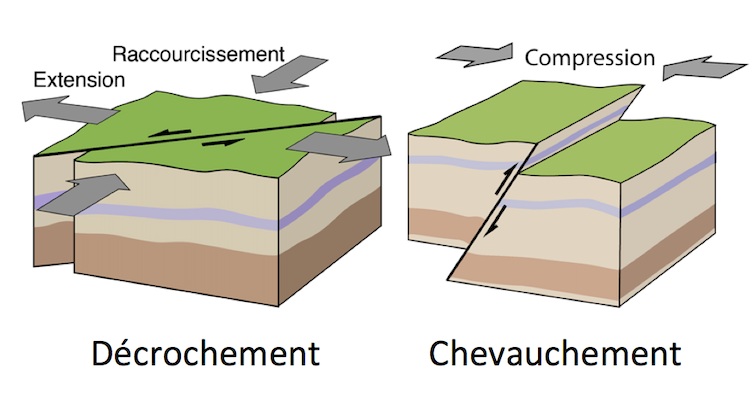 Two types of faults were activated by the seismic movements in Haiti: setbacks and overlaps. Wikimedia, CC BY

These earthquakes can be repeated in the form of a sequence of events: this was the case in the XNUMXth century.e century when four destructive earthquakes struck the south of the island in 1701, twice three months apart in 1751, and in 1770.

On August 14, the major world seismological agencies produced a first analysis of the earthquake in a few minutes. Thanks to open data from seismological stations around the world, located thousands of kilometers from Haiti, we know that the movement was half stalling and half overlapping, with an epicenter, the point where the rupture begins, located in the peninsula. from southern Haiti. The total slip is approximately 1 to 2 meters and the rupture lasted approximately 25 seconds.

Why is working so fast important?

However, establishing such a model of the earthquake is tantamount to trying to decipher a conversation taking place in the next room. We know that someone is talking, but we can't figure out who is talking and what exactly is being said.

Here, the global seismological data does not make it possible to identify which fault has ruptured, whether the rupture has reached the surface or where the slip is distributed. However, this information is crucial for the emergency services in order to identify the regions where the damage was the most important, because access to the fault zone is difficult and requires a complex organization, which we are implementing, but which must deal with the urgency of the situation.

This is where local seismological data and satellite images come into play.

Since 2010, successful capacity building in Haiti

In 2010, the scientific intervention was very complex to implement and it took many weeks before the first usable data became available. In fact, at the time there was neither a Haitian seismologist nor a national seismological network, and scientists for a long time remained "blind" to the event that had just occurred.

This earthquake marked the awakening of seismology in Haiti, thanks to the commitment of young Haitians who went to train abroad, to the establishment of a master's degree in geoscience at thestate university, and the development of a national seismological network maintained by the Bureau of Mines and Energy. International support was numerous to accompany Haiti in this scientific evolution (France, United States, Belgium, Canada in particular). We are reaping all the benefits today: three days after the earthquake, three young Haitian seismologists left to install seismometers and GPS stations in the field. This rapidity of response, essential in order not to miss any of the seismic whispers of the earthquake zone - the “conversation” mentioned above - was unthinkable in 2010.

In addition, the idea of ​​supplementing the national seismological network with an effort involving citizens was born in 2019. The Haitian organization in charge of the official seismological network was struggling to find funds to keep the seismometers operational. Moreover, the studies showed a real need - a demand even - from citizens for more information on earthquakes and environmental risks in general.

The arrival on the market in 2019 of simple and compact seismometers has changed the situation: small boxes the size of a cell phone, placed in his living room or an office, connected to the Internet and to electricity, their data are made available to seismologists in real time. To date, 15 citizen stations are operational in Haiti, hosted by "earthquake-citizens".

The data, put available to everyone on the Internet, have already made it possible to better locate the epicenter of August 14th and to locate in real time the many aftershocks still in progress.

Indeed, following an earthquake, the tectonic constraints are locally upset. This new state of telluric forces is accommodated by numerous aftershocks, earthquakes of lower magnitudes than the main shock, including the number and magnitude decrease over time. The spatial distribution of the aftershocks indicates a break about 80 kilometers long, trending east-west, with the epicenter located at the far east of the break.

Satellite images to see the rupture

THEoptical imaging - "simple" photographs of the ground from space - made it possible to map numerous landslides during the day following the earthquake. Unfortunately, Haiti is a very cloudy area, and we were unable to detect the surface displacements which would have made it possible to see if the rupture had indeed broken the surface (displacements which are often a few tens of centimeters).

Thanks to the'radar imagery, an initial mapping of the damage was carried out the day after the earthquake (we look to see if each pixel changes a lot between successive passages of the satellite), also making it possible to guide the emergency services to the hard-hit areas. It is also this technique which made it possible to measure the ground movements between each passage of the satellite (before and after the earthquake).

An earthquake not exactly as we expected

Despite the limitations inherent in the radar imaging technique we use, we immediately realized that this earthquake was not completely what was expected: instead of moving away from the satellite like what our understanding of the fault system traversing the southern peninsula suggested, the ground moved, for a large part, towards the satellite, that is to say upwards. 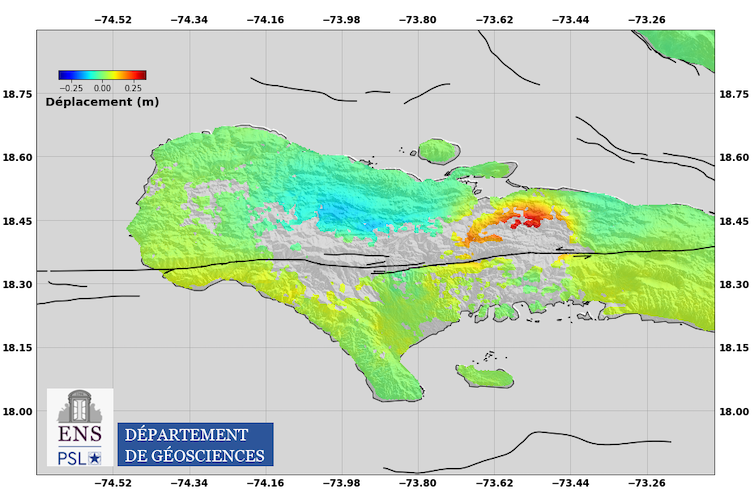 Map of movements due to the earthquake of August 14 in the direction of the satellite line of sight. Positive (red) shifts indicate displacement toward the satellite (i.e., here, essentially upward). The negative displacements (blue) indicate a displacement here rather horizontal. The data were acquired by the Sentinel 1 constellation (ESA) and processed by Bryan Raimbault at the Department of Geosciences of the École normale supérieure (PSL).
Bryan Raimbault / ENS-PSL, Provided by the author

With the following satellite acquisitions, our understanding has advanced: the fracture is distributed over at least two faults, with an overlapping movement in the east and a stalling movement in the west - a conceptual model consistent with the distribution of aftershocks, the former seismological models and geological and geodetic information acquired in the region since 2010.

This new knowledge will make it possible to refine our understanding of the tectonic activity of the region, to better understand the geological history of Haiti, but above all to improve the seismic hazard models on this island unfortunately hit regularly by that kind of disaster.

This article and the studies in progress benefit from the support of numerous researchers and experts, in particular the laboratory's seismology team. GEOAZUR (CNRS, OCA, UCA, IRD), led by Françoise Courboulex and Tony Monfret. The work in progress is being carried out within the framework of the international joint laboratory CARIBACT, funded by the Research Institute for Development.

This article is part of the series "The great stories of science in open access", published with the support of the Ministry of Higher Education, Research and Innovation. For more information, please visit the page Openthescience.fr.